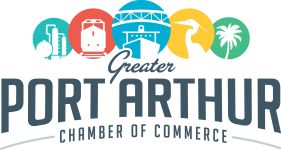 Port Arthur is located 90 miles east of Houston on the gulf coast of Texas.
Port Arthur is the namesake of Arthur E. Stilwell who platted the 1895. He envisioned Port Arthur as a resort, as a port City and as the terminus of the railroad he would eventually build linking Port Arthur to Kansas City.
John W. “Bet-A-Million” Gates, gained control of the Stilwell interest and built a rice mill in Port Arthur in 1900. He spent $1.4 million to dredge the Port Arthur ship canal then ceded it to the federal government for one dollar. This transaction was completed by Congress’ designation of Port Arthur as a port of entry, and by 1914 it ranked as the twelfth largest port in the United States and the second largest refining port. Today Port Arthur is the home of three major refineries and still the important terminus of the Kansas City Southern railroad. The town of a mere one thousand souls in 1900, has grown to almost 60,000 with a diversifying economy to sustain Port Arthur’s growth into the twenty-first century.